The odds of annihilation are far more probable than the odds of continuity, of going-on. If one took into account all of the things that could conceivably go wrong, that could kill you, right now, you’re very quickly presented with an almost incalculably vast range of possibilities – anything from a spasm in your colon through to a bullet flying through your head or something as incredibly improbable like you being attacked by a chow – this vast range of possible things that could kill you, right now, as an individual. And when you compute those things together, in other words, if you take the possibility of me having a heart attack plus me being computed by the possibility of me being shot, by the possibility of my synapses, or a peculiar thing like my brain dies, put them all together, why is it that I’ve taken my next breath? Statistically the odds of annihilation beat the odds of continuity every moment. And that’s for you as an individual.

Not only that, but you as an individual are an ant, less than an ant, on this massive ball called the earth which is floating in a soup of infinity that has meteoric events whizzing past it all the time, any one of which could take the entire planet out! Never mind you as an individual. Never mind us as a species, everything that we could ever conceive of. So if you put all of the possibilities of catastrophe together, why are you still alive? You see these materialists who discount the possibility of a creative genius, of a Rabb, a guardian Lord who is in charge of this whole experiment called existence, aren’t entirely honest about their own materialism. They ask statistics of us, as if it would strike them as inconceivably improbable that they’re still alive without some massive super-ordinate intervention that happens moment by moment by moment.

..that which is very vast withholds itself from you.

One of the things that we do very frequently in the training we do is to take people to a high promontory and ask them to look, so they get a sense of seeing things, how they really are. So you’re standing on a cliff or a mountain top and you’re looking. And if you watch people doing that you’ll see them for the first two minutes looking at the view and guess what happens in the third minute? He’s playing with the grass in front at his feet – because that is not sustainable. The human being can’t look at that. It’s too big. So, what do you do? You go play with the grass. That’s how we are. We play with the minutiae because we can’t cope with the truth of looking in the face of the infinite. That’s how we are.

Wake-up you! Understand who you are!

So on occasion the Infinite has to shoot a warning shot across our bows by getting the chow to attack us or by killing off the neighbour or having the neighbour’s child run in front of the car in front of you so you see his brains splattered all over. We all need these things. Wake-up you! Understand who you are! Understand the reality of the business that you’re busy with here. Understand the reality of existence. You are only alive by grace of a genius which is infinitely bigger than yours that keeps you alive moment by moment by moment. You’ve not been designed to make your life work. You’ve not been designed to be in charge because these are all in the face of the vastness the problem. That it’s fundamentally futile. Nobody can keep themselves alive. Not possible. Nobody can keep themselves uninjured. Nobody can keep themselves safe. In the sea of all the possibilities of a majestic imposition nobody can keep themselves safe. Sometimes people say, you know, small men say this, “I’m just a little guy so I’ve got to act tough! I’m just small.” So what’s the difference?

In the face of Infinity what’s the difference between a guy who is five feet six inches and a guy six feet four inches? Nothing! This is crazy. We’re all equally small. We’re all spots, tiny, microbial. Less! It shows you how things actually are. So we need to be reminded of our status. And we need to be reminded of our vulnerability, our fundamental incapacity, constantly, for His moment by moment intervention in our lives to keep from us the catastrophe which is the natural consequence of being a very creature in the face of a vast universe beyond description.

So we thank Allah Subhana wa Ta’ala for this shocking lesson that He gave us today by showing us just how proximate catastrophe is to us and how He can take catastrophe and take it just so far, a few centimetres further, another twist and it could have been a blood vessel and then what would we do? We’d be giving him a funeral. And this is how it is. We have no guarantees here. We buried my young brother-in-law six months ago. It’s an inconceivable idea that this kid, who grew up as a kid before me, has preceded me into the qabr. Inconceivable! The truth! This happened.

The surest way to be reminded of who you are and to keep your nose to the grindstone on this Path and to stay worshipful is to befriend your death, to constantly refer to it, to refer to it frequently enough so that you become comfortable with the idea. Only the dead have truly submitted. So if you are Muslim understand that this is the reality that you claim actually to be coming to terms with, because that is the reality of the very small in the face of the incalculably vast. That’s the significance of Allahu Akbar.

May Allah Grant us success on this Path.

This discourse was given by Shaykh Ebrahim after a dhikr session at the Zawia’s December Gathering in 2009. 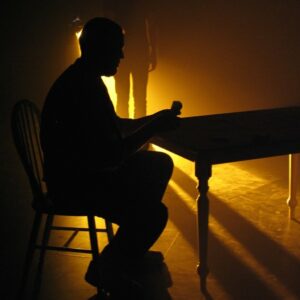