I heard of a conversation with the greatest guarders the time of the rasul (s.a.w.s) called Ubay. [Umar ibn Khattab] said to Ubay “Ya Ubay, what is taqwa?” and Sayyiduna Ubay (RadiaAllahu anhu) replied “Ya amir mu’minin, if you were to walk through a very narrow, very thorny path, how would you walk?” Sayyidina Umar (RadiaAllahu anhu) said “I would walk very carefully, I would gather my clothes very closely to me, I would step very carefully that I would not get hurt or get scratched by thorns” and Sayyiduna Ubay said, “Ya amir mu’minin, that is exactly how taqwa is.”

Taqwa means that you treat the world as a very thorny path and you are careful with every move you make.

Taqwa means that you treat the world as a very thorny path and you are careful with every move you make. What can we learn from this beautiful narration? Taqwa is variously translated as fear of Allah, as piety, as Allah consciousness. The relation relating to the discourse between Sayyiduna Umar and Sayyiduna Ubay suggests that Taqwa is as much as anything else about being careful, about carefulness. It means that you do not just act in a thoughtless way like a person stupidly storming down the path of thorns but that you are careful with how you act. You are careful with how you act because you know that absolutely everything you do is of consequence and you can either be dealing with this world in such a way that you get torn up in this process. That your ruh, your soul gets torn up in the process of this life or it goes through this process of this life without harm. That means that you do not just act thoughtlessly on the basis of what you want but you act on the basis of what the situation requires of you.

If the man is walking on this narrow thorny path and he wants to get the quickest way and he goes through the thorns he will hurt himself. Such a man is displaying a discourtesy and a disrespect to the path because the path is around the thorny bush and not through the thorny bush. So it is with our lives, there is that which Allah wants, which he will explain in the situation in front of us and there is that which we want. That which we want is normally the quickest gratification; I want to be made happy now. I don’t care that Allah has decreed that is should take the longer root around the bush, I just crash through the bush and therefore because of my impatience I get stuck somewhere in the middle of the bush all torn and broken and injured.

Taqwa has a related quality and that is sabr.

The patient man realizes that when he does what Allah wants, it might look like he won’t get to his own goal that he wants immediately. In fact it might appear like he won’t get there at all but he has sabr, he can suspend what he wants and follow the course that Allah is putting him on. That man gets to the place where the man stuck in the thorns would have come to if he was only patient. What this suggests is that Taqwa has a related quality and that is sabr. Sabr is patience. You have to be patient with what you want, you have to leave what you want, maybe to not get it at all in order to be able to do what Allah wants. And Taqwa means that you are careful to do what is right, you are careful to do what Allah wants and not what you want.

Now why it is appropriate to relate Taqwa – this idea of carefulness – to the idea of fear because Taqwa is also associated with our sense of accountability. If you are driving through the city and you have just broken a traffic law and you see the policeman, you will become frightened. It is in fact the fear that you will get caught by the police that you are careful, that keeps you following the rules of the road. So your carefulness is related to the understanding that you are accountable.

To think that you can cheat Allah is madness because then you belie your faith.

Accountability means that you understand that there are horrific consequences when you do not do what is required of you except that when you are driving through the town you can still cheat the policeman. To think that you can cheat Allah is madness because then you belie your faith. Then you say that He is not the witness. Taqwa therefore means that you understand that everything that you do has a consequence. That every careless thing can cause you damage and cause the world damage. And for every harm you do to your own soul and for every harm you do to the world, you will [be held to] account if you do not sincerely do Tawba. This is the real secret because we are designed to be stupid, we are designed to be impatient.

How does the man learn to follow the path and not just push his way through the bush? It is because he is trying to burst through the bush that he hurts himself terminally and after having done that a few times he then decides this is not a clever idea. That process whereby you recognize that to follow your own desires and not to follow what Allah wants from you is not a clever idea, is called Tawba and Allah loves the Tawba of the sinner more than he loves the right action of the pious. The Tawba of the person who has erred double confirms that He is the Lord.

This discourse was given by Shaykh Ebrahim after a dhikr session on 28th September 2010.

Previous PostThe Deen and the Modern WorldNext PostRamadan – Fast for the Body, Feast for the Soul
accountabilitycarefulnessconsciousnessdamagedangerfaithfear of Allahpatiencepietyreligionrepentancesabrtaqwatawba
0Shares 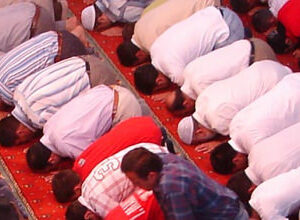 The Deen and the Modern World