We are entering a period or a time where the development of events is overwhelming and, particularly when one experiences a part of that overwhelming development in one’s own life, one forgets. One easily forgets that you are not being singled out. You are not being unfairly treated by Allah. Particularly at this time the human condition is to be overwhelmed. The most powerful people in the world, as we speak, are overwhelmed. The President of the United States is faced with a set of overwhelming circumstances. Economically, militarily, wherever he turns, he is leading a country which is facing catastrophic collapse. So, in so far as we are in a position where we feel overwhelmed by the development of events we shouldn’t feel that we are being singled-out by Allah, that you are the only one – because, you are not, particularly not at this time. This is the human condition generally and it is particularly true for the human condition now, at this time.

We are made to be swamped. It is our nature.

One of the duas that the Rasul (SallAllahu alaihi wasalam) used to read was: “Ya Allah help me! Rabbi, help me! I am overwhelmed!” Now if the exemplar of mankind can be with his hands raised in front of his Lord, confessing that he felt overwhelmed, why should this not be true for us? If the best of men is overwhelmed how can we not be overwhelmed? How can we not face that which is overwhelming? It is the nature of how Allah Subhana wa Ta’ala has made us, that we are going to be overwhelmed, that is our fate, to be overwhelmed. One can almost imagine the death of a dying person to be like a drowning. It is like the whole universe closes in and snuffs out the light.

You are saying, in effect, “I seek protection of You from You.”

There’s another practice, a dhikr that we do which is particularly useful at the time of feeling overwhelmed. And the practice is to stand in a doorway or at a window and to look out and to either slap the side of the door, the frame of the door, or to slap the frame of the window, ten times and every time you slap the frame you say: “HasbiAllah! HasbiAllah! HasbiAllah wa Ni’am al-Wakil.” Every time, you say that ten times, looking out into the world. It is very important that you do it standing inside the doorway, looking out. The building represents that which is human, that which is protected, that which is made to protect ourselves from that which is overwhelming – out there – the wild, the natural, His first Nature, which is that which is vast and majestic.

It is also very important to consider why we use the number 10 in this particular instance because it is significant with this dhikr. Number 10 is our – we can refer to it as our nurture number. It is the number with which we have come to civilize the world. It is the binary number – one/zero. With this binary system one/zero, we have made the forests tame, we have civilized the planet. So the number 10 is the number whereby man has made walls, throughout the whole of the world, and made his entire world safe. So when you smack the wall 10 times you confirm the boundary that you have, what you are saying to Allah is: “This manmade boundary, this thing that is a patterning of multiples of 10, this thing only exists by Your Idhn. I seek protection of You from You.”

So these are two practices that we should bear in mind in this time of overwhelming, in this time of cataclysmic and catastrophic change where many peoples lives are being destroyed and we can see the destruction happening around us and it touches our lives. “Rabbi, help me! I’m totally overwhelmed!” Looking out of the door or the window, smack the window 10 times, say it out loud – “HasbiAllah! HasbiAllah! HasbiAllah ……” and allow your being to sink back into the armchair of your Rabb’s Hand, knowing full well that when you appeal to Him to withhold His Overwhelming Nature from you it is His Pleasure to grant you your dua. Because He is a Generous Host, He is a Kind, Merciful Host. We are His guests on this planet. We are His guests in this vast universe. It is His Delight, it is His Pleasure to care well for us and to honour and protect the grateful guest.

This discourse was given by Shaykh Ebrahim after a dhikr session on 14th February 2009. 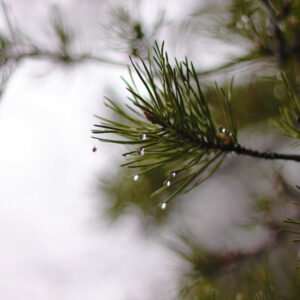