Our nafs (self or soul) is the greatest gift from Allah to us, and at the same time our deadliest enemy. Rather it is an amanah that Allah has entrusted us with, so we must honor and appreciate it, but also fight and subdue that aspect of it, which will cause our ruin, if we do not guard ourselves against it. The most cited metaphor for it is that of a wild riding beast, which will try to throw off its rider, as long as it is untamed, but which becomes a trusted companion and support in his quest, if he masters it.

This duality of ‘it’ (viz. our self) and ‘we’ or ‘I’ (again the self) may seem a bit paradoxical, but it might become clearer if we ponder deeply over what our Creator has told us about our creation and about our self.

Rabb is by definition the ‘owner of the slave’.

The most ‘ancient’ record relates to a dimension prior, or beyond the time-space continuum that we find ourselves in presently (which only started for us with our entrance onto the stage of phenomenal existence), i.e. the event of ‘alast’, where Allah – subhanahu wa ta’ala – had gathered all the selves of man collectively and confronted them with His Reality of being their Rabb1,or one could say, with their reality of being His slaves (hence the prophetic tradition ‘Whoever has taken cognizance of his self, has attained gnosis of his Rabb’). Rabb is by definition the ‘owner of the slave’. By this ancient record of man’s reality from a ‘time’ before he appeared on the scene of virtual existence, before he was remembered as human being2 , it is established that the self of man is not an independent entity that owns an existence of its own.

If man considers himself as such, and behaves like he owned himself, he does not live his reality, but lives an illusion, which of necessity must collapse, go up in smoke, at one point; latest, when the Angel of Death flushes away his sand castle with the surf from the ocean that made the sand and owns it. Man’s tendency to fall prey to this delusion is the quintessence of kufr, which has been translated as ‘disbelief’, ‘covering-up’, ‘ingratitude’, and if man insists in the pursuit of this crime, the ultimate consequence is Hell – the ‘Fire’ of separation, in which he neither lives, nor dies3 – and this is, as indicated above, the self-destructive aspect of man’s self.

The other key for unlocking the mystery of the self is provided in the account of Adam’s creation – peace be with him. At first there is the declaration of Allah’s intent to the angels that He is about to put man as His Representative on earth4.

Then, in another revelation, the Exalted Truth – Al Haqq – subhanahu wa ta’ala – makes known the way, in which He created this representative. In the realm of phenomenal existence (space, time, matter and form) man’s creation is described as starting from a primordial mineral compound (‘clay’), from which the Wise Creator brought forth propagative life, which He then subjected to an unfathomably intricate refinement process, by which He fashioned a most excellent life form to such perfection that it was fit to become the vessel, which was to receive a breath of His Spirit5.

Neither the ‘clay’, nor that perfected life form by itself was man, and the divine breath of spirit – known as the ‘ruh’– which Allah breathed into it, wasn’t either. The soul or self of man only came into existence by the ‘consummation of that marriage’ of the spirit with the form, and hence this soul has at its very core a split ipseity, having tendencies, attractions and appeals towards both of its sources, the spirit and the form.

In order to enable a functional collaboration between its intrinsically opposed traits, Allah has provided man with an interface, as it were – the ‘qalb’ or heart – an organ, endowed with the most remarkable qualities and faculties6. It is endowed with the conscience, the faculty of discernment between truth and falsehood, by which it is able to assess the legitimacy of the self’s lofty and base inclinations and demands in any given situation. It is also the communication central, where all faculties and levels of experience of the entire person – physical, mental, and spiritual – are linked up, and lastly, it is the executive command center, where man’s will power is seated and his freedom of choice is executed by intent.

This intrinsic bi-polarity of the soul, being in its own right a manifestation of the cosmic law of duality7, has many ramifications. One of them, which is of particular interest in this context, is the duality of equipoised stillness and permanence vis-à-vis transition and transience. The former of these are attributes of the spiritual source of the self, and the latter pertain to its earthly origin. The ‘nafs’, which is the Arabic word for self /soul, as used in the Qur`an, has been given varying attributes to describe its various modalities, e.g. ‘evil-commanding’, ‘blaming’ or ‘self-accusing’, ‘serene’, ‘deeply satisfied’, ‘fulfilled’, etc. On one end of this spectrum we find the base animal tendencies, which are totally concerned with survival in this world and the satisfaction of its appetites at all costs, and on the other end we find total freedom from all desires of its own and devotedness and gratitude to its Rabb. This indicates that it not only has the potential of being groomed, but that it has the right to be guided from its initially uncouth state to a station of nobility and honor.

Everything in existence is mirrors in which the Beauteous Countenance of the Divine Narcissus is reflected..

The existence and manifestation of those despicable traits in the self is just as necessary for the completion of the divine Affair, as it is necessary for the self to combat and overcome them in order to fulfill the purpose of its participation in it, viz. its raison d’être. The more it succeeds in doing so, the further it will move from claiming success, and the more it will realize the utter perfection of its Rabb in His Acts and in the reflections of His Attributes in the manifestations of phenomena and events, and the more it will realize its own integration in this awesome spectacle of perfection, which is nothing other than His Self-Revelation. Everything in existence is mirrors in which the Beauteous Countenance of the Divine Narcissus is reflected; all the mirrors are of no consequence ultimately, and it is only their testimony, which remains8.

The self of man bears in its essence a shadow reflection of the divine essence and some exclusively divine attributes, i.e. qualities that the creation cannot carry, and which become apparent in the creation through their action upon it, but absence in it; hence we are calling them shadow reflections. They are projected onto the self through the spirit in which they are latent. Since however they are only shadow-reflections they are lacking reality as such, i.e. the self does not own these qualities; they are given to it as a costume to perform in it a particular role, as it were.

Forgetfulness – nisyan – is man’s own most essential property, so much so that he is literally defined by it9. The primary reference of that forgetfulness is to his oblivion with regard to the above-mentioned primordial event of “alast” and its implications, but even after the conscious acknowledgement of these implications in this terrestrial life, i.e. the aware submission to the divine Supremacy of his Rabb, the wearing of that vesture in the enactment of his roles keeps causing him to forget that it is only roles, which he is performing, that the character he is playing is not the reality of his self. On the other hand, from the perspective of the drama’s virtual reality, which we must guard ourselves very carefully against taking it lightly10, man’s ability to do justice to the requirements of the respective roles, he is called on to perform, would often be greatly impaired, if he were always fully aware of the actual reality of his self.

To attain perpetual awareness of his actual reality, without being veiled from it by his involvement with the creation, and at the same time without being veiled by it from his obligations towards the creation, is the ultimate fulfillment of the purpose of man’s split selfhood, and this is what our path is all about, the realization of tawhid – unification – in its true sense. 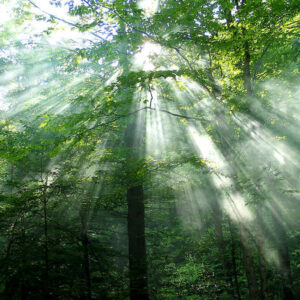